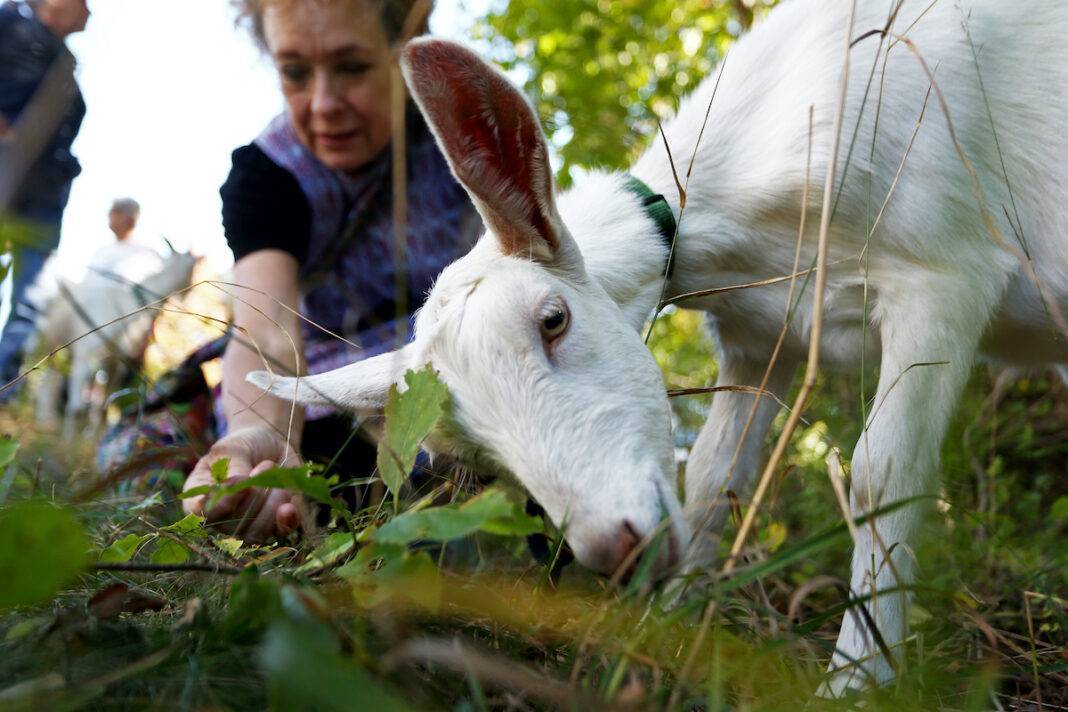 As climate change–induced wildfires worsen across the world, some locations in the U.S. have found a solution: Goats. Lani Malmberg, a goatherder from Colorado, travels the American West, allowing her herds to graze as a fire prevention method. She is hired by local governments and private landowners.

Goats can eat vegetation that other grazers can’t reach — goats can stand up to nine feet tall on their hind legs. Their waste also increases the organic matter in soil, which means it can hold more water. In addition to reducing brush, the herds can restore land that has been burned by a previous wildfire. And adding to their usefulness, goats are able to graze on steep slopes, areas that other fire prevention methods have trouble reaching.

Goats are one of many tools that state and local agencies are employing to prevent or control wildfires, including prescribed burns and herbicide.

They’re called “forever chemicals” because they accumulate in humans and animals, and don’t naturally break down. Maine has banned the use of all products with per- and polyfluoroalkyl substances (PFAS) by 2030, becoming the first state to implement such strict regulations. PFAS cause a range of issues, including birth defects, infertility, cancer, and thyroid disease. And they show up in the blood of 97 percent of Americans, according to studies.

We find these chemicals everywhere from cookware to cosmetics, to clothing. By 2023, manufacturers in Maine will be required to report their presence.

While other states ban PFAS in certain products, such as carpeting, Maine is leading the way on a total ban. Let’s hope others aren’t too far behind.

The past summer brought deadly heat waves to cities all over the continent, including the Pacific Northwest and British Columbia. But research shows that there’s a powerful, towering weapon in the fight against urban heat: tree canopy. Communities with more tree cover remain cooler than those without.

But in yet another instance where we see inequity exacerbated by climate change, a study of more than 3,000 communities across the U.S. indicates those with a higher number of nonwhite residents have fewer trees and less green infrastructure.

A new project aims to cool things off, at least in Los Angeles. The USC Urban Trees Initiative “combines advanced mapping technology, air quality research, and landscape architecture to show the best places to plant new trees.” It’s been put to use in two neighborhoods that lack shade, with plans to follow suit with others.

There’s a lot of buzz around a new initiative taking off at Pittsburgh International Airport. When faced with a problem of honeybee swarms forcing planes to land, the airport decided to coexist with its fellow flyers, rather than eradicate them. Honeybee populations have faced stark declines in recent years. Honeybees are essential to our food supply, responsible for one in three bites of Americans’ food. Many airports, including Pittsburgh, are surrounded by natural habitat suitable for honeybees — woods, overgrown fields, and streams. What’s more, beekeeping has solved the airport’s swarm problems. Swarm traps around the airport perimeter offer a more suitable landing spot. Honeybees also act as “bio-detectives” — their honey indicates to scientists whether the airport’s levels of toxins exceed regulated air pollution levels.

A number of other airports have started similar operations.

While you might have noticed a shift to paper straws in your favorite coffee shop, or reusable bags at the grocery store, single-use plastic is still all around us. New Zealand aims to change that. The country is paving the way in the global fight against waste with its recent promise to ban most single-use plastics by 2025.

Among the banned plastics are bags, cotton buds, cutlery, straws, and fruit labels. These items will be phased out beginning in 2022.

Despite its reputation as environmentally conscious, New Zealand is currently one of the top 10 per-capita producers of landfill waste. This ban, according to environment minister David Parker, would “ensure we live up to our clean, green reputation.”

There is currently just a pilot plant, but there are plans to build a commercial-scale demo plant that will produce 1.3 million tons of steel a year by 2026.

While “green” steel might cost 20 to 30 percent more than traditional steel at first, the cost will come down as the electrolysis process and green energy sources become more efficient. Government subsidies, tariffs, and taxes could also help bring down the price.

Electric vehicles are a godsend in the urgent transition away from fossil fuel. The current problem, however, is that the infrastructure required for an all-electric fleet is lacking—there aren’t enough charging stations. Michigan has a solution.

In a groundbreaking move, Gov. Gretchen Whitmer announced that the state will construct a wireless, dynamic charging roadway. ​​”Michigan was home to the first mile of paved road, and now we’re paving the way for the roads of tomorrow with innovative infrastructure that will support the economy and the environment, helping us achieve our goal of carbon neutrality by 2050,” said Governor Whitmer.

While you might hear most often about reducing carbon dioxide output to fight climate change, scientists are also stressing the need to extract greenhouse gas from the atmosphere — and a carbon-capturing plant in Iceland is on the cutting edge. The plant, called Orca, was built by Climeworks, and is currently the world’s largest.

The process involves large fans sucking carbon dioxide out of the air and collecting it in filters. After the filters are blasted with heat, freeing the gas, the carbon dioxide is mixed with water and pumped into underground basalt caverns. There, it solidifies into stone.

Nearly a billion metric tons of carbon dioxide need to be extracted per year by 2050 to reach carbon-neutral goals. While Orca can only capture 4,000 metric tons annually, Climeworks says this capacity will grow rapidly. This plant will serve as a blueprint for more of its kind around the world.

A tiny fish, famous for halting construction of a federal dam in the 1970s, has made its way off the endangered species list. The snail darter, only 3.5 inches long, is native to Tennessee. An expensive dam-construction project on the Little Tennessee River came to a halt with the discovery of snail darters in the water. Construction of the dam would interfere with the fish’s only known habitat. This culminated in a legal case in which the snail darter was protected. The species went from being endangered to “threatened” in 1984, and is now off the list altogether.

“The Endangered Species Act was passed to ensure all wildlife, even species that some might view as insignificant, deserve to be preserved for future generations,” said Martha Williams, principal deputy director of the U.S. Fish and Wildlife Service.

Scientists have developed a mapping system that can help track and protect coral reefs. The Allen Coral Atlas creates high-resolution maps of the world’s coral reefs through combining local data with nearly 2 million satellite images. The maps will inform researchers and government officials about where action is needed to protect reefs.

While only 1 percent of the ocean floor is covered by coral reefs, over a quarter of marine wildlife relies on these habitats. Increasing water temperature and acidity, caused by climate change, have destroyed about 27 percent of reefs.

The map could also help scientists discover which coral species are more resistant to increasing temperatures, and could be used to restore damaged reefs.

Several once-endangered tuna species are now in the clear. Two bluefin, a yellowfin, and an albacore were either removed from the endangered species list or categorized as no longer critically endangered in September. This comes after a decade-long effort to mitigate overfishing, and speaks to the success of sustainable fisheries. In 2011, the International Union for Conservation of Nature announced that these four tuna species, among other commercially fished tuna, were endangered. Since then, reduced quotas and improved data have allowed better tracking and management in order to protect the creatures against overfishing. These impressive species — which can grow up to six feet long and 550 pounds, and reach speeds of up to 40 mph — will remain in our oceans.

The last leaded-gasoline refinery, located in Algeria, shut down in August. Leaded gasoline has caused high levels of lead in human blood, as it pollutes the air, water supplies, crops, and soil. Vulnerable people, particularly children, are most susceptible to lead exposure’s harmful consequences.

The shutdown of Algiers Refinery comes after the U.N. Environment Programme spent decades pursuing a global ban on leaded gasoline. Scientists estimate that ending production of this toxic fuel will prevent nearly a million deaths from heart disease, stroke, and cancer each year.

Ok, maybe you haven't jumped on the composting bandwagon entirely. Maybe you don't have the yard...
Read more

What’s So Bad About … Nuclear Energy?

Is it the low-carbon answer to keeping our lights on? We can thank nuclear fusion for the...
Read more

Greg Milne Does the Right Thing with His Kia Niro EV

For this issue's Cruising with Currier, I took to the dirt roads of West Tisbury with...
Read more

Dear Dot: Should I bother with solar panels?

Dear Dot, I was considering getting solar panels on my roof but with the approval of Vineyard...
Read more

Colorado Goats Fight Fire As climate change–induced wildfires worsen across the world, some locations in the U.S....
Read more

In a Word: Radical Hope

In the summer of 2005, I sat across a table in a restaurant with my friend....
Read more

Dear Dot: What to do about all our damn packaging?

Dear Dot, Is there any service on the island for recycling soft plastics? We get a lot...
Read more

Farley Pedler Built a Small House, and Then He Built a Bigger One

Laurie David and her 2021 Nissan Leaf

The No Nukes Festival: A day of music, friendship, and hope

How Katama Airfield escaped the clutches of developers

What’s So Bad About … Nuclear Energy?

Greg Milne Does the Right Thing with His Kia Niro EV

Dear Dot: Should I bother with solar panels?